Porcello and Davies started awfully. The score was 5-3 after 3. Then they settled in and made it into the sixth. Porcello was hurt a little by an Inge error and Peralta’s lack of range.

Valverde allowed the bases loaded in the ninth. He allowed no runs and the Tigers won 6-4. This is the second consecutive game the winning run came to the plate in the ninth.

My youngest daughter got Furbush and Kelly to sign her hat. They were her Detroit and Toledo first pitch catchers.

We got two Royal bags for checking in with At Bat.

You must eat at the barbecue place in left field if you come to Kauffman. Absolutely ignore the nacho recommendation from yesterday. The nachos are good. The barbecue great. Prices are $9.25 or $10.75 for a huge amount of food. The price difference depends on the number of meats and sides you choose.

It was $1 day for peanuts, canned sodas and hot dogs. Vendors actually brought these around, too. Well done, Kansas City. 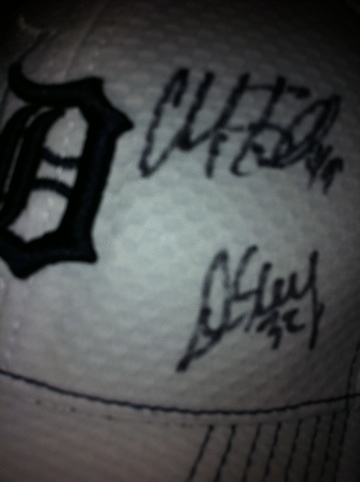 Scoreboard fun: Look at the OPS, SLG and OBP. It looks like KC computes OPS from the raw stats and rounds rather than just adding OBP and SLG.