We went to the Mud Hens game today. Pizzapapalis has free kids meals and $1 beers on Wednesday, so I picked this game.

When we got in the park we signed up for contests at Guest Services. The girls got to participate in a game where they threw frisbees disguised as sandwich toppings into oversize pants. The bad news is they had the first ofer in Mud Hens history. The good news is that you get Subway gift cards for losing, too.

Casper Wells got a double, single and triple in his first three at bats. The triple hit high on the wall in left center and rebounded further than the Tides outfielders expected. It almost came back far enough for an in-the-park home run. Casper struck out in his fourth at bat and was left on deck when the game ended.

Andy Oliver pitched deep into the game. He hit one batter twice and walked 3 in 7.1 innings. He also struck out 7.  Lester Oliveros took over in the eighth and allowed two inherited runners and two of his own to score resulting in the 5-4 loss.

Inge was 0 for 2 with two walks, one with the bases loaded. He looked professional although I thought I noticed a cringe the second time the Tott’s strike out player of the game came up. Most MLB teams don’t so that, I’d guess. 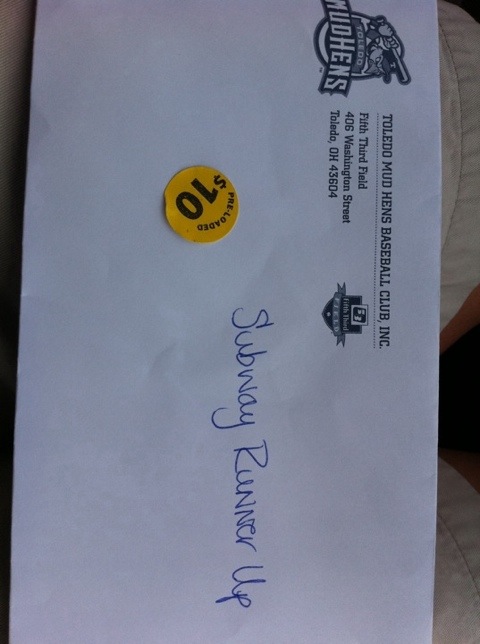