Back to the Usual in Toledo 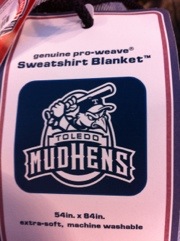 Sadly for the Mudhens, I’m back to my losing ways. The Mudhens lost 8-7 in a game that had a lot of stranded runners for both teams. In fact it was the longest nine inning game in Mudhens history. My daughter, two of her friends and I stayed for 8 innings of the game. We almost missed a comeback as the Hens scored 3 times in the ninth. The temperature had dropped quickly from a high of 60, however, and not even a newly purchased blanket could not keep the less well insulated teens warm.

Drew Smyly was lifted in the second after throwing a lot of pitches that inning. He had also allowed 3 runs through 1 2/3. Doug Fister injured himself in Detroit and the organization probably did not want to push Smyly and risk another pitcher.

I remember a couple other events. Eldred, who I need to find out how he entered the Tigers organization, hit a home run off the scoreboard in left field. Brooks Brown hit the Indian shortstop in the batting helmet with a pitch. The shortstop left the game, but walked off and never lost consciousness.

I think I need to bring scorecards to Toledo to help me remember more than just general impressions.