If someone wearing a Tigers polo approached you in with a folder at around 6 PM by Gate D then you are in a group of two and you have bad seats. Trust me. My daughter and I got upgraded to the Stubhub Ultimate Seats. These are two recliners just behind the Tiger Den seats in Section 128B. The area has its own TV.

Lest you think it is perfect, sometimes the replay of TV would distract me from the view of the field. Also, since waitstaff serve the Tiger Den seats no vendors go by these seats. I had to walk 20 feet to get a Badass beer. If I had wanted Leinenkugel I would have had to walk nearly 30 feet. It also took us nearly a minute to find how to recline and raise our footrests. We survived. We even let my wife and her brother (who drove separately) have a turn in our seats. (Remember- you are a group of two!)

The Tigers lost 3-2. Ichiro did not play. He has had a rough year, but this was unexpected for me. His replacement in right field, Peguero, tripled and homered. He scored two of the three runs. Victor Martinez hit a two run home run in the fourth that temporarily gave the Tigers a 2-1 lead.

Other notable things for me were Al Alburquerque pitching in the ninth and striking out two batters while stranding a lead off double allowed by Furbush. Also, Raburn struck out three times. Leyland pinch hit Santiago for Raburn with two outs and one on in the ninth in a one-run game. In other words he went for the platoon match up over Raburn’s power. It was not a move I would have made, but you can’t fault Leyland given how Raburn has hit this year. Raburn needs to get his act together. 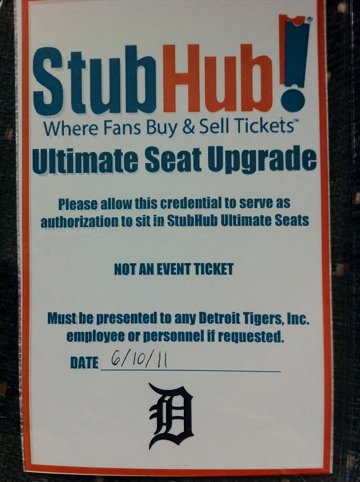