We went to see the Mud Hens for my daughter’s birthday. She brought along an 8×10 of her first pitch to Don Kelly and succeeded in getting it signed.

She also split the big 12 scoop sundae with her friends. It was supposed to come with a bobble head cow. Since they were out they let her pick a t-shirt. This was well done. T-shirts cost very little to the Mud Hens and my daughter was very happy with the outcome. 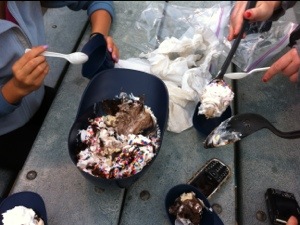 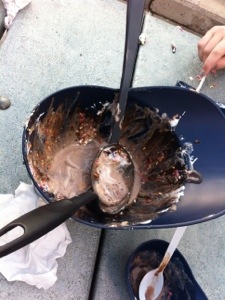 The Mud Hens won twice. They finished a suspended game from yesterday. Then they won a 7-inning night cap. Smyly was ejected in the second inning of the second game for hitting a batter. In the last inning Rondon, who I had hoped to see pitch, brushed back Will Rhymes with a 101 MPH fastball. Rhymes caused a fuss and Rondon ended up ejected, too.

Al Alburquerque pitched in the first game. He got 3 outs in his first inning of work. Batters hit his fastball, but were fooled by the slider. He couldn’t complete a second inning of work to close the game.